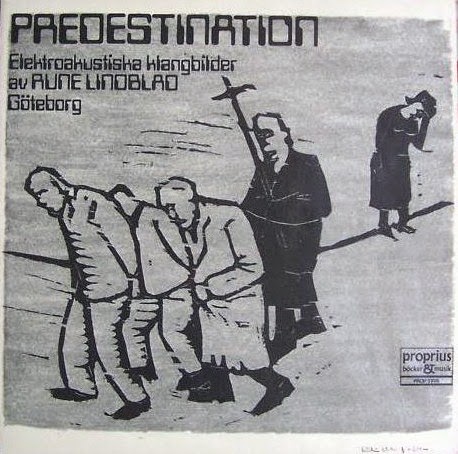 
Lindblad was a Swedish visual artist and an avant garde composer
whose involvement with the first public performance of musique concrete
in Sweden in 1957 lead to demands for refunds by the audience, and the
infamous review of the concert being "pure torture" by critics. This LP
was oddly released by a mostly religious oriented label, which might
explain the title and confusing cover art ("modern" music was a bit of a
trend by this point, so it's little wonder even the church set were attempting
to make some money from it... one can only wonder what the regular
audience of this labels releases thought when they first heard it, though...).
This release is comprised solely of minimal synthesizer workouts ranging
between stripped back Kosmisch squelch fests and icy drone pieces, most
of which would sound perfectly at home on a diy nu new age cassette
release of the past 10 years, or so. Thanks to the mighty and sorely missed
Mutant Sounds blog where this was found several years ago.

If you want something removed please leave a message in the comments of the offending post. Thanks.